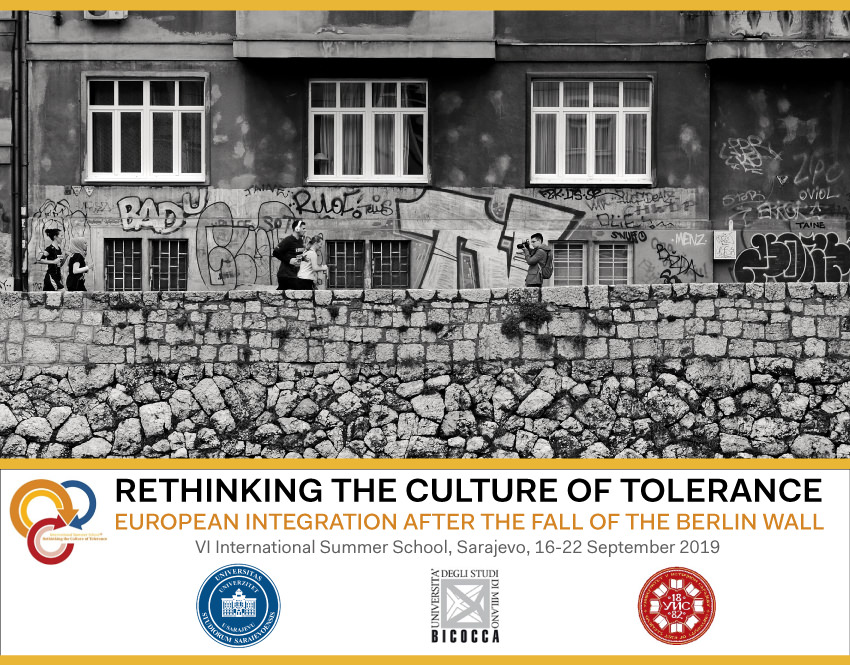 The sixth edition of the Summer School in 2019, titled “European Integration after the Fall of the Berlin Wall”, dedicated to the thirtieth anniversary of the revolutionary year 1989, will be hosted by the University of Sarajevo and its Center for Interdisciplinary Studies. It will examine problems and contradictions faced by the evolving European societies, with a focus on the post-communist countries involved in the process of EU integrations over the past three decades. It marks the conclusion of the second three-year cycle of the School, previous editions being devoted to “Europe, Borders and Migrations” (University of East Sarajevo, 2017) and “Groups, Conflicts, and Reconciliation” (University of Milano-Bicocca, 2018).

The fall of the Berlin wall has been celebrated as a milestone in the advancement of human freedom. But, it also gave rise to new concerns and issues regarding  institutional  and  political  practices,  as  well  as  the  everyday  life  of citizens, within the frame of an emerging European space. The remembrance of its legacy is of crucial importance today: while the ‘Iron Curtain’ has lost both its material and symbolic power, new political, social and economic cleavages and conflicts have emerged across European societies, bringing new challenges to the project of the European integration.

Lectures: Participants will take part in 26 hours of lectures and 14 hours of seminars and panel discussions.

Certificate and Evaluation: The Summer School awards 2 or 4 ECTS:

Scientific Committee of the International Summer School ‘Rethinking the Culture of Tolerance’ is glad to announce the results of the selection of candidates for the Sixth edition of the School.

A total of 52 applications was received. Due to the high academic profile of most candidates, the Selection Commission exceptionally decided to accept 47 applications: 19 from the ‘Western Balkans’ countries, 14 from Italy, and 14 from other European and non-European countries.